Today was such a blast that Dave and I haven't stopped talking about it all evening. Today we celebrated Ethan's 2nd birthday with a Construction Party. All last week we were preparing for Ethan's birthday party. Ethan helped with projects and he knew where we were putting his party things. He knew he couldn't play with it because it was "for his birthday party."

We knew with church today that we would have to set everything up the night before. Dave was a little worried that Ethan would get into everything this morning and to be honest so was I. But I hoped that the same "don't touch, it's for your birthday party" would work like it did all week. Sure enough, Ethan was so surprised when he woke up this morning but he didn't touch anything when I used the same excuse!

After church, Becca came over to help set up everything else while Ethan took his nap. She got some great shots of all the centers we set up for the party. 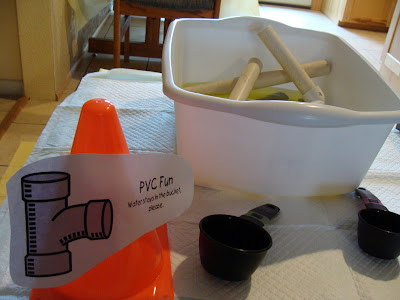 PVC Fun was a bucket of water with yellow food coloring to go with our theme. It's great to take the pieces apart and put them together again. I loved watching the kids play with them like they would with legos. 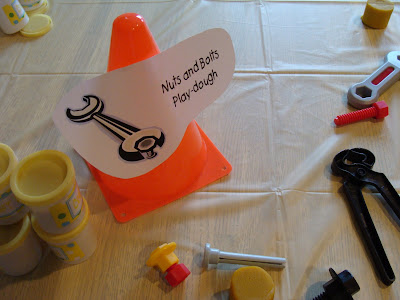 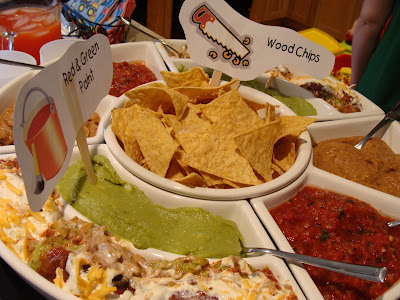 How do you like our green & red paint with wood chips for snacks? 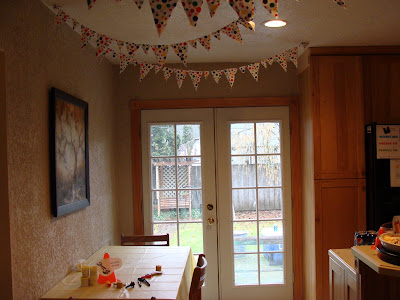 I got this idea here 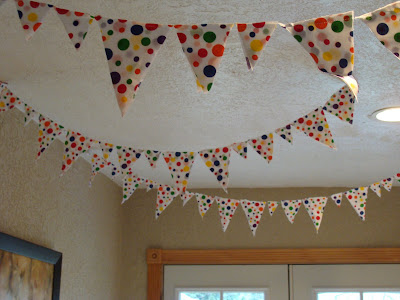 I would sooo do this again! It was way worth the time cutting out scraps of fabric! Ethan helped me with making his "flags." When he woke up this morning he ran into the kitchen, looked up, and said, "Woooow! Flags!" I really want to do this re-usable project instead of streamers that I end up just throwing away! Way more Eco-friendly, don't you think? 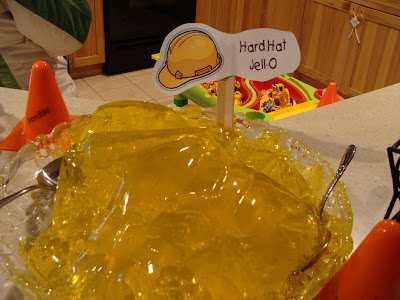 Ok... I had the brilliant idea to use a plastic construction hat as a Jell-O mold, but when we put it on the plate it looked more like a bicycle helmet. Five minutes later it collapsed! So funny anyway! I mean what am I really going to do with six boxes of lemon Jell-O? Sometimes my brilliant ideas are just hilarious memories! 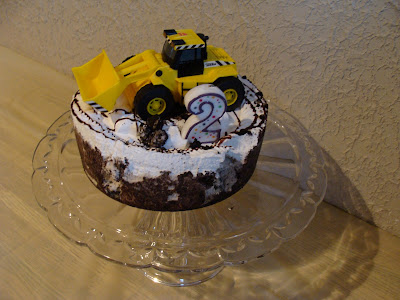 Thanks to Dave, we found an ice cream cake that Ethan wasn't allergic to. I had pre-bought a construction bulldozer for the top. I didn't know until today that it made noise. So great! 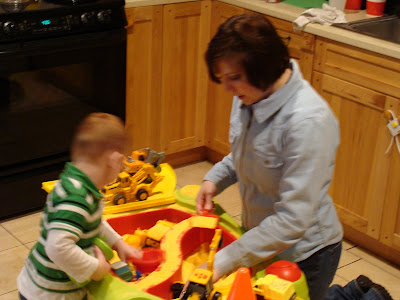 Family started to arrive and the party got started with Ethan still in bed. Josh and Becca were there setting up the food that they helped bring (as Dave says, "Was super yummy!"). Then the birthday boy woke up, saw ALL of his friends, and was ready to PLAY! 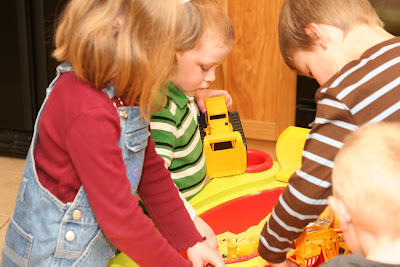 I was so excited to get my construction cars out of my teaching supplies and put them into the sensory table with cornmeal. It was such a surprise for Ethan since he had never done this activity before. Plus, I forgot that I had a couple of "Bob the Builders" in with the cars! Ethan was so excited! 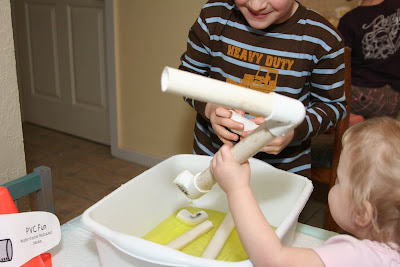 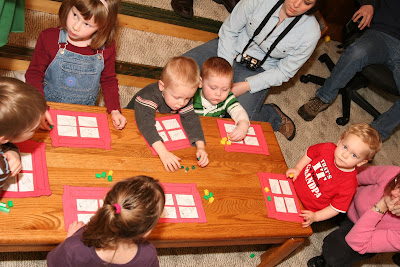 Our game was "Tool Box Bingo." Each card was a pattern of a tool box and Becca cut and glued the tools onto the tool boxes. We used Monopoly houses as markers. In the end everyone is a winner and gets a goodie bag. 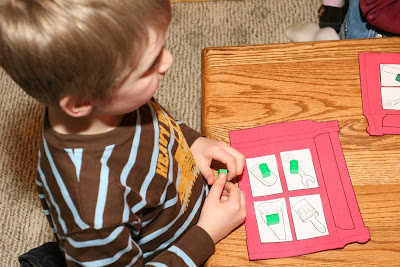 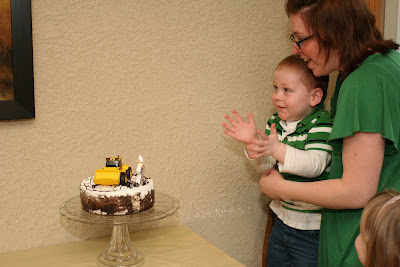 We sang "Happy Birthday" and I realized that we hadn't practiced blowing out the candle this week. No matter as long as he gets cake in the end! 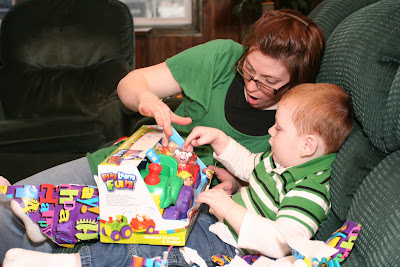 I love this picture that Dave took. He always gets those great ones of me being "dramatic." This tractor is the one Grandma and Grandpa got him. 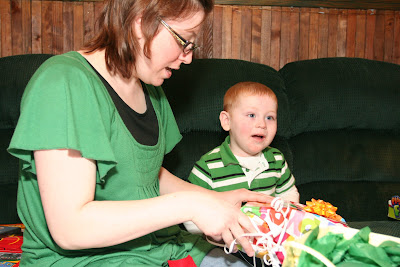 I think this is the photo Dave caught Ethan reading the tag on the package. He said it said "Sarah" when it really said "Josh." 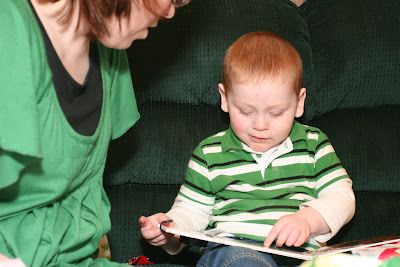 He loved the book the Starkey family gave him! 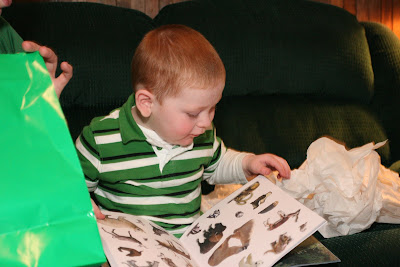 Tammy got Ethan this really awesome Planet Earth Sticker Book which, as you can tell, he is going to love!
After the party it was such easy clean up... pick up the table cloths and throw them away. Honest! It was such a beautiful day and so much fun. I had such a blast with no stress in it at all. It was so natural just to have centers and places where the kids, parents, and other family could just have a good time! Dave and I both sat down afterwards and agreed that the day will forever be a fantastic memory!
Posted by Jennifer Evans at 8:42 PM

What fun I had at the party. It was so much fun and I could tell Ethan had a blast. I also have realized... Ethan has a thing for Sarah. ;) He must like tall blonds!

It was an AWESOME birthday party.