During the move we noticed another one of Ethan's cars was missing. When we asked him where he was he never came up with an answer... for about a week. Then, we heard him say that it was also in the stove! Oh no! Not another one. So, Dave got out the wire hanger again and "hooked" Ramone. I was glad to see him again. Then, we decided it would be a good idea to try and get Guido again. Dave used the flashlight to find him. Then he decided to use duct tape on the end of the hanger to "stick" to Guido. Yeah, that didn't work. Then when shining the light, Dave realized that there was another hole on the other end of the stove. So, he used the end of the hanger to flick Guido to the other side and sure enough - out he came! 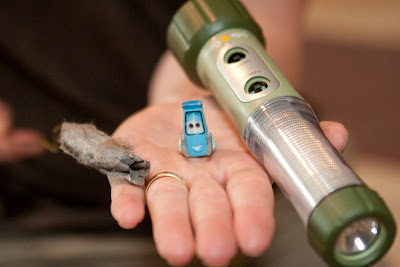 See?! Guido is very happy to be rescued!
Posted by Jennifer Evans at 8:44 PM

What a smile after he endured all of that! Guido, you have such a possitive attitude!