Dave's vacation started yesterday, on my birthday! Dave said that I could sleep in which I was really looking forward to. Since the time change, Ethan has been getting up at 6am. On Sundays I get up even earlier than usual since I have to be ready for church before Ethan gets up. So, Dave, who rolls out of bed fifteen minutes before we need to leave for church, said that he would let me sleep in and he would get up with the early bird. So, guess what happened?! Ethan didn't get up until 7:30! Typical! So we all got to sleep in, which was nice. But, I told Dave that I get another day to sleep in! ;)

Church was great and very relaxed. I actually felt younger yesterday! Probably because Dave was such a helper with the little guy.

After church Becca and Josh came over and Dave started getting ready for our birthday dinner. Becca gave me a break to read a magazine while she took Ethan on a walk. She came back after two blocks since it started to rain. So, we went into Ethan's room and played. Becca pulled this huge basket out from under Ethan's bed that Grandpa got him. She climbed in and Ethan stared at her for a long time with this hilarious look on his face! Then, Becca's mother-in-law called. I had to get a picture so Barbara could see what she looked like! It's a great picture! Can you believe how pretty she looks even in a basket?! Then Ethan started to put his trains inside the basket with Becca. 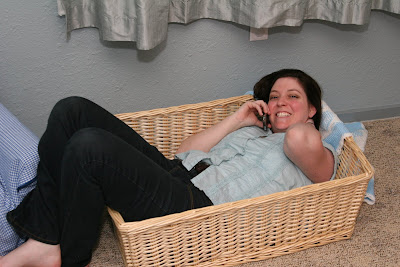 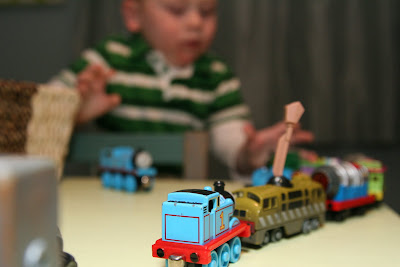 Later, Sarah came over and we ate a amazing dinner made by my sweetheart. We opened gifts (which I will post about later), and had cake. Becca I'm sure will post about the pictures that we took while talking to Deborah on the phone from Israel. It was so funny!

Thanks to my family for a great birthday... the best part, is that it isn't over yet! Dave has the whole week off and he has a special day date planned on Wednesday. 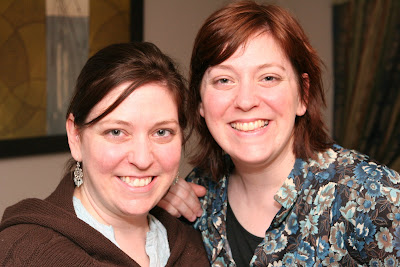 Ha LOL Becca look so cute in the Basket. Sounds like you and Becca had an Awesome Birthday! Happy Belated Birthday. Love Ya Jen!

Oh man, I didn't call you to tell you Happy Birthday. Well, Happy Belated Birthday from me to you!

I'm glad you had such a wonderful day, you deserve it! Can't wait to hear about you special date.