What a blessing it was for Dave to go to Dad's retirement party that Roth's put on for him in West Salem. Dave was able to capture every bit of emotion. Here are some of my favorite pictures of the event. 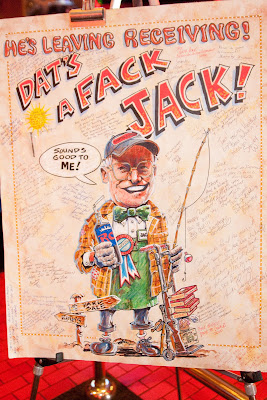 Dad's boss knew a cartoon artist and had a picture of Dad sent to the guy. They told him everything Dad loved and this is what came of it. In the drawing you can see Dad's favorite RC drink, fishing poles, signs that direct to garage sales, tv dinners (I guess when he worked in Woodburn he would eat a Banquet TV dinner everyday), gun for hunting, and of course his flannel shirt. 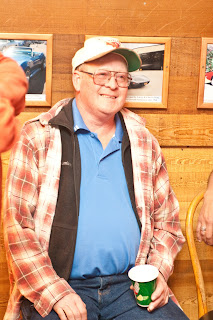 Dad dressed in a polo shirt and jeans to some-what dress nice for the event. They brought a flannel for him to wear. Everyone came wearing flannel shirts. LOL! 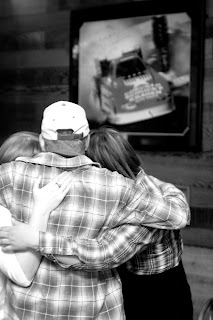 I love this photo Dave captured. It really just showed how much everyone loved Dad no matter the age. I heard one gal say to him, "I just don't know what we are going to do with out you, Jack." Do you know what his answer was, "Oh, you'll survive." I don't think he realized what an impact he had on the many stores he worked at, but he did. Maybe he didn't realize it until after the party. 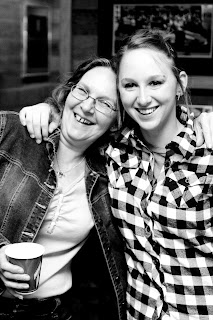 Heather came home from Iraq just a couple of days before Dad's retirement. This picture of Heather and Mom I just love. 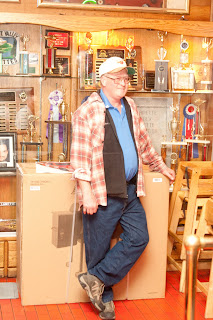 So, Dad was at work about a week before the party receiving product on a truck. Then he sees this box. He says, "Who ordered this?!" The driver jokingly says (and also ruining the surprise a bit), "Didn't you know Jack? It's yours!" It was a $1000 Tregar  Barbecue. Of course Jack came home giddy but didn't want to get his hopes up cause maybe the guy was really joking. But, at the party, there was the box with a banner over the front and a bow on top. He was able to open it in front of everything. What a gift for him! He made room for it on his porch the next day (bringing us his old one that can only cook a couple of burgers on compared to this baby!). 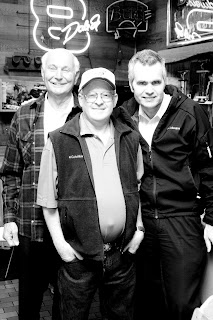 This is a picture of Orval Roth and his son who manages all the Roth's. Dad said about a week before the party, that Orval came into his backroom, and waltzed right up to him and said, "I'm having pizza with you next week!" Dad said, "All I could say was, 'Umm yes sir," while nodding his head. I guess Dad said he couldn't remember Orval ever going to a retirement party.

Posted by Jennifer Evans at 8:30 PM

Great pics~! I love my grandpa, thanks for sharing the retirement party.

So glad to have you back, Jen! I LOVED the cartoon of Jack!!!!