I got an email from Becca telling me about Ethan's day at The Riverfront Park, in Salem yesterday. I wanted to add it to this year's December Daily:

"so... I have a trillion pictures from the carousel but I think that is the best one of E... if you want some of the horses and detail on the carousel - let me know... I was disappointed that not many from the playground turned out - you really need 3 people playing with him to be able to get the shots you want (like our trip to Keizer). He just was so excited and running everywhere and you have to be so careful he doesn't decide to jump off something he isn't supposed to. Plus the structure was wet.


Oh, did I tell you E met Santa? Hehehe... no, he didn't sit on his lap or anything but yesterday was the first Breakfast w/Santa this year. Santa was hanging about the gift shop.

We went in the gift shop to buy our tokens (this story will be perfect for your Dec Daily) and when we went to leave, St. Nick walked through!

Ethan looks up and sees him and at first, gasped and kinda got scared, so I lifted him up and sat him on my hip and said, "who is that!?! It is St. Nicholas!"

(Santa was just passing through so they weren't formally introduced).

We all wished him a Merry Christmas as he walked toward the employee's break-room. (Have to say he wasn't the most personable Santa. I think he thought he was off the clock.)

Then, he looks at Josh, gasps and sucks in air like he does when he is excited, and says in a loud whisper, "Uncle, it's St. Nicholas, just like in the story!" 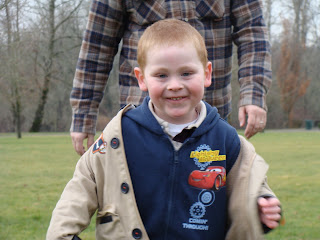 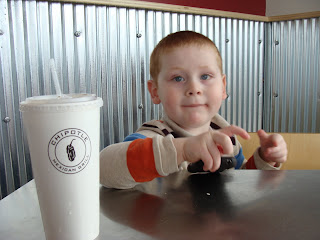 Posted by Jennifer Evans at 2:26 PM