It was an eventful day, to say the least. The kids enjoyed the new Christmas songs and the Bible story. Their eyes did get big though when I put Mary's puppet on my hand. She is quite frightful. But, I told them that she was "a lot prettier than this in real life" and tried to flatten her hair a bit and they smile, laughed, and I could continue. But, it must of been the long holiday because they were done trying by 10:30.

It was time to get ready to go home when Ethan needed to use the potty. While I was trying to get his clothes on my nose, for no reason, started to bleed! So, I am trying to get his pants on while not tipping my head because it is pouring! Oh my... did you know it can't be done? Then, Terron had to use the bathroom. I am trying to help him and get Ethan's pants on while my nose is bleeding. I finally rush to get a paper towel to put under my upper lip (great trick to stop the bleeding) when I notice that Tiffany has been sitting in her car waiting! Ahhh! She totally understood when she saw me. ;)

So, after rest time I got out the paint and paper to make our Christmas chain, a family tradition. I decided to use foam stamps and white paint this year. I thought it would be fun for Ethan to stamp to his heart's content. When I opened the stamps, which had never been used, I realized that number six was missing and I had two number eights! My foam stamps have been packed in a box in the attic for three years, so there was no way I was going to dig to find another set. So we are without a number six and sixteen.

Anyway, it was quite the job to have Ethan paint with the stamps. I guess everything is extreme with him right now. So, why would today or this moment be any different? When it was done and dried he picked the place to hang it - right by the front door. But, give him half and hour and the chain was down and as I rushed to his side he was kicking and crushing it. Thankfully it is not too bad and hanging up again.

I didn't get a photo today because of the mayhem but I will be sure to get Ethan taking a link of the chain for this entry! 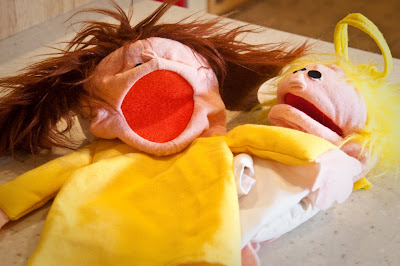 Aww the puppets are cute! Maybe a wee bit scary..but not really lol!